Bp Barbara Harris: one year on 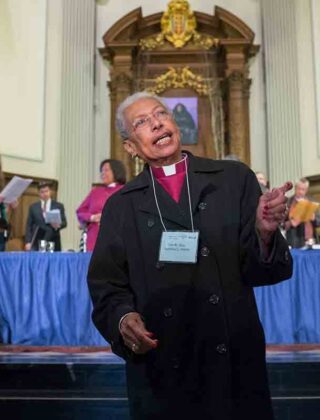 As the one-year anniversary of the death of Bishop Barbara C. Harris on March 13 approaches, Bishop Alan M. Gates and Bishop Gayle E. Harris are inviting people and congregations in the Diocese of Massachusetts – and across The Episcopal Church – to include remembrances of her in their prayers and liturgies.

In a letter of invitation issued to congregations in the diocese on Feb. 11 – the 32nd anniversary of the historic consecration of Barbara Harris as the Anglican Communion’s first female bishop – Gates and Harris remembered her as “a courageous pioneer, an outspoken prophet and an indefatigable champion of God’s justice and witness to God’s grace.”

They added that in the Diocese of Massachusetts, where she served as bishop suffragan for 13 years and remained an active part of diocesan life in her retirement years, “she was for us also a wise counselor and faithful companion. For three decades our diocesan gatherings were enlivened by her keen wit, consummate storytelling and impromptu musical accompaniment.”

“It has ever been the delight of the faithful to recollect with gratitude the lives of those in whom Christ’s love has been manifest,” the bishops said in their letter of invitation. “We commemorate their lives for the inspiration and strength which we derive from their witness. We turn to them also as continuing companions in the Spirit, forebears of whose love and prayers we remain assured.”

Resource and reference materials have been collected online to support commemorations, including a collect and suggested propers. Find them at www.diomass.org/barbara-c-harris-commemoration-resources.

Gates and Harris noted in their letter that while formal churchwide commemoration of those who have died, on The Episcopal Church calendar and in its official liturgical resources, is a process of communal discernment that falls under the purview of General Convention, local commemoration “is an established part of Christian tradition.”

They invite congregations offering a commemoration of Bishop Barbara Harris to send a brief description of it to Gates’ office, in care of Laura Simons at lsimons@diomass.org. “Such accounts may become part of the testimony for subsequent consideration of churchwide observance,” they said.