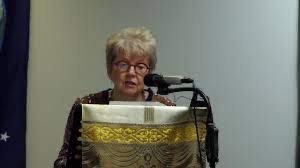 A celebration of Anglican women’s history in Brisbane Diocese

From Biscuits to Bishop is a multimedia exhibition celebrating Anglican women . This digital exhibition, to be launched in mid-2021, will be complemented by a display of objects and memorabilia in St John’s Cathedral Brisbane.

The exhibition begins with the formation of the Diocese of Brisbane in 1859. The diverse group of women profiled, including Aboriginal and Torres Strait, gender diverse and overseas born women, is representative of their eras – both those working within cultural and political restraints and those who intentionally pushed the boundaries for women’s participation in church and society.

The Church is a mirror of wider society. Throughout history, patriarchal structures in the church restricted the roles women could play. Widespread challenges to patriarchy gained pace in the early 20th century. As women moved into different roles in society, the church’s response was generally slow, adopting these social movements decades after secular institutions.

Largely unsung, church women have contributed vitally to the development of Brisbane in the 150 years since the formation of the Anglican Diocese of Brisbane in 1859.  Women have fundraised to build churches, established schools for the education of girls, supported soldiers in war, and championed women’s rights to leadership in churches.

From prescribed functions of biscuit makers and fund raisers, women pursued new paths as educators, missionaries, and activists throughout the 20th century. The key issue in the latter half of the century was the ordination of women. Largely due to the efforts of the Movement for the Ordination of Women, changes to church law in Brisbane Diocese to permit the ordination of women as deacons were made in 1988. Further changes allowed women to be priests in 1992 and bishops in 2008. The first woman to hold the office of bishop in Brisbane was the Right Reverend Alison Taylor, consecrated in 2012, as bishop for the Southern region.

So we move from biscuits to bishop. Through considering the life stories of women we trace the evolving position of women in the diocese—from the kitchen to the boardroom, and from laity to clergy.

The exhibition will run for 6 weeks from Thursday 6  May until Sunday 20 June in St John’s Cathedral, Brisbane.

Contacts for this Exhibition are: or Dr Gwenneth Roberts, gwen.roberts@uq.edu.au mobile +61417660288 or Revd Kate Ross, kross@stjohnscathedral.com.au