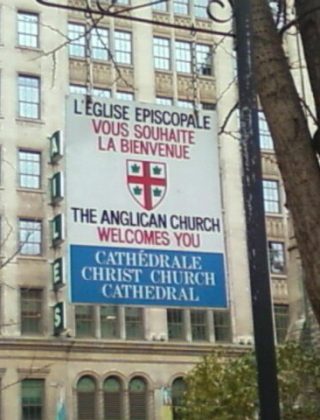 The Anglican Church of Canada’s new primate says her top priority will be a review of the church’s mission and ministry—a re-examination of its role that could result in “painful” change for some as the church adjusts to challenging times.

Linda Nicholls, bishop of the diocese of Huron, was elected the church’s 14th primate in Vancouver on July 13, partway through General Synod. She is the first woman in the history of the Anglican Church of Canada to hold the position.

In her first interview with the Anglican Journal as primate, two days after the installation, Nicholls said her first priority would be to get started on a strategic review of the national church’s ministry and mission. The review, mandated by General Synod after a vote July 14, is to be undertaken by the Council of General Synod (CoGS), which the primate chairs, and is to culminate in the presentation of a strategic plan to General Synod when it next meets in 2022.

The process, Nicholls said, is likely to bring improvements as well as change that some will find difficult.

“I think people in general find it easiest to stay with what we’ve always done, because change is always painful—it doesn’t matter what change,” she said. “It means losses and it means gains. And sometimes we can’t see the gains because we’re too busy grieving the losses. And so, until we can see that the gains will be life-giving for us in new ways, we’re reluctant.”

A resolution calling for the strategic review arose from CoGS itself, after the presentation of a draft 2018 financial statement at the council’s March meeting. Members of the 2016-2019 CoGS, concerned by a significant decline in contributions from the dioceses to the national church, wanted to ensure that the council that succeeded them would be directed to a strategic review by General Synod.

Nicholls said she wanted to consult with a wide variety of people: national church staff, plus bishops and other Anglicans at the diocesan level.

Nicholls said she also hoped to hear from “other people who can bring to us wisdom about organizational structure and help us to think out of the box.”

Members of the United Church of Canada and the Evangelical Lutheran Church in Canada might be particularly helpful to consult in that regard, she said, since both these churches had undergone “massive restructuring” recently.

The serious financial concerns facing the church, Nicholls said, should not, however, push it to prioritize money over vision.

“In my experience, if you focus on the money, all you do is make everybody anxious—and are seen as being only about fundraising. And that’s not who we are,” she said.

“We need to relearn that joy that comes because we’re not constantly worrying…. So you start with a sense of vision for what God has called you to do and be in your community, and then you ask, ‘What do we need to do that?’—and then you say, ‘Do we have enough of that, and if we don’t, what would we do about it? Maybe we need to sell a building.’

“If you challenge people with a vision, people will find resources. They will raise them, they will find them, they will give them if they feel passionately about the purpose and the value of what’s being set before them. I’ve seen it time and again, where parishes have been transformed by that.”

Nicholls’s installation came at the end of a General Synod that had been, she said, something of an emotional rollercoaster for her—not only because of her election halfway through it.

There were moments, on the one hand, of intense pain—such as the failure of a resolution to allow same-sex marriages. The church, she said, will now have to work on healing after that divisive vote; the bishops will need to listen to and support one another—and the church will also need to work to restore relationships with those outside it who now perceive it as homophobic.

“I think it will have damaged our reputation in the community, absolutely,” she said. “It will make it difficult particularly for people who have LGBTQ2S+ family members. It will put barriers up that will take some work to break down.”

But General Synod was also marked by wonderful milestones for the church, Nicholls added: a number of resolutions furthering the development of the self-determining Indigenous Anglican church; the apology for spiritual harm done to Indigenous peoples; and the first reading of a resolution on a prayer for reconciliation with the Jews. The synod also voted to adopt the affirmations in A Word to the Church, a document commended to it by CoGS in March. The text affirms Indigenous rights to self-determination around same-sex marriage and the existence of different understandings among Canadian Anglicans of the marriage canon and of marriage itself. It also affirms their commitment to “presume good faith” in those who hold other understandings of marriage, and to “walk together” despite their disagreements on the issue.

“I think we’re beginning to see people recognizing that [A Word to the Church] is much more helpful to us than had been initially realized—that in its description of where we are and what we can affirm, it gives us a way to move forward together,” Nicholls said.

By recognizing the diversity of opinion that exists in the church, the primate said, General Synod’s endorsement of the document opens the way to “local option”—the ability of dioceses and other church jurisdictions to make their own decisions about same-sex marriage.

“I think that was a huge step,” she said. “It’s basically saying, ‘We can live with local option in certain places as long as we are not required to affirm that with a vote and a change to the canon.’ That seems to be a place where people are able to rest.”

At the same time, Nicholls said, the wide range of views around marriage among Canadian Anglicans—a diversity she said she became especially familiar with as a member of the Commission on the Marriage Canon—suggests to her the church may not be done talking about it.

“There may be further work, at some point, on marriage that we want to do,” she said. “Do we believe that a single theology of marriage is essential to our life as a church?”

Many Canadian Anglicans have emerged from the same-sex marriage debate, she said, with the question—also raised by the 2010 General Synod—of whether the church should stop solemnizing marriages altogether. And the church may find itself more receptive to the idea than it was then, she adds.

“So few people are doing weddings in churches now. I’ve known young clergy who very rarely get to do a wedding, ever,” she said. “When I was first ordained, you could, on some Saturdays, have two weddings. These days you’re lucky if you’d have one in a year. Most people have so many other options of where to get married and how to get married, and the church is not high on their list unless they are deeply rooted in the life of the church.”

One of the biggest tasks now facing the church, Nicholls said, is its ongoing work with Indigenous people—completing the development of a self-determining Indigenous church within the Anglican Church of Canada, for example. This, of course, will be the work primarily of the Anglican Council of Indigenous Peoples (ACIP), she said, and of Mark MacDonald, National Indigenous Anglican Archbishop. But she said she trusted she would be involved in conversations around it, and that the truly Indigenous ways of discernment and decision-making that she expected to result from this process would be “a gift to the whole church for us to see.”

Asked how long she expected to be primate, Nicholls replied that the precise length of her tenure remained to be worked out. It would depend partly, she said, on the needs of the national church and partly on the interpretation of the canon on the primate, which states the primate can hold office until reaching the age of 70. Her 70th birthday, Nicholls said, would fall shortly before the 2025 General Synod; but the canon, she added, does not seem entirely clear on whether the primate must resign by his or her 70th birthday at the latest, or at any point in his or her 70th year. The most she would serve, she said, would be two triennia.

Nicholls said she was tentatively expecting to officially end her work as bishop of the diocese of Huron September 30, and so anticipated some overlap in her work and responsibilities until that time. Because of the high cost of housing in Toronto, Nicholls is not planning to actually move to the city, but rather to remain in London and commute on the train several days per week, working the rest of the time from home.