Mary, the Mother of the Lord 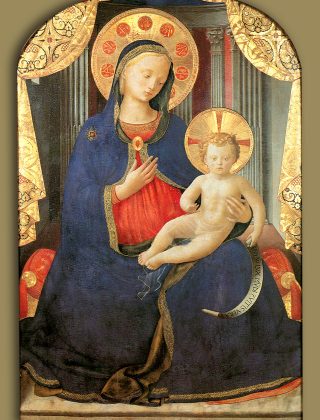 A PROTESTANT AND HER MOTHER MARY

One of last year’s members of the Community of St Anselm, the new monastic community based at Lambeth Palace, M’Kenna Gillespie, reflects on her relationship with Jesus’ mother, Mary.

“I want my mom.”  And for the first time in my life, I realized that in some ways, I had her…I had Mary.

Growing up in seven different Protestant denominations didn’t exactly prepare me for this moment.  That is not to downplay the significant impact each of those had in shaping, growing, and shepherding me in my faith.  Just that this particular moment was a gift I received on a 30-Day Silent Retreat under the influence of my Roman Catholic brothers and sisters.

Unfortunately, it’s a tender subject, because as some of our teachers (influenced by the Dombes Group) pointed out, we have a tendency to look upon Mary either too highly or not at all, as opposed to finding a just middle – making her a point of our division, when instead, she is a victim of it.

But in this moment, as I sat down to pray, I was neither a Protestant nor Roman Catholic, but a daughter coming before her Father with burdens too heavy to bear, desiring the comforting embrace of her mom, who was over 5,000 miles, a 7-hour time difference, and 26 more days of silence away.

And so, for the first time in my life, I let her in.  I asked Jesus to share his mother with me, as he did with the disciple whom he loved, at the foot of the cross.  And I told her everything…all of my joy, all of my pain…everything I had held in for months…everything to which I had no one to express to in full.

When I began this story, I was sobbing.  Yet, by the end of it, I had peace.  I could not see nor hear her.  Her presence was as humble as her life.

Charles Péguy invites us to address ourselves “to she who is infinitely joyful. Because she’s also infinitely sorrowful. Seven and seventy times seven times sorrowful.”

Mary experienced extremes of both joy and sorrow in her relationship with Jesus that I will never fully understand in mine, remaining with him in his two greatest moments of fragility, as he came to earthly life within her womb and died an earthly death upon the cross, as he inhaled his first breath and exhaled his last.

Mary knows the tension of joy and suffering.  Her ‘yes’ to one did not exclude the other.  And from her I learn that neither does mine.