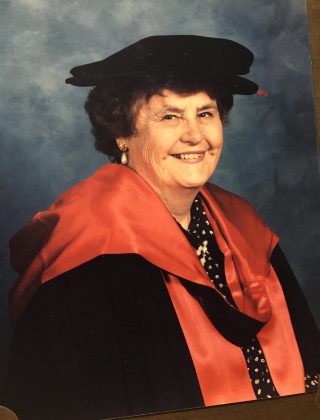 A great warrior has passed from our earthly midst, Mavis Rose in Brisbane who died on Sept 27,(2019) having survived 5 years quality of life with ovarian cancer to age 92. What a leader, campaigner Mavis was for women’s priesting in the 80s and 90s. She was a prolific letter writer and a fearless forthright activist, known as ‘the black sheep’ in Brisbane Anglican Diocese! Her book ‘Freedom from sanctified sexism’ based on her Doctoral thesis on the history of Anglican women, sits on the shelves of Theological Colleges. Mavis’ funeral was held in Brisbane on Oct 5.

Homage to a great woman and a buddy to many of us. Gwenneth Roberts, September 2019

And here she is protesting the sexist language outside St John’s Cathedral – the cathedral people changed the sign to ‘Become a Cathedral Builder Today.’ (Courier Mail 20 June 1991) Elaine Lindsay and I included it in our book Preachers Prophets and Heretics (2012).
Janet Scarfe

Obituary for the life of Dr. Mavis S. Rose

The late Dr Mavis Rose was born in Bray, Eire, in 1927, and baptised into the (Anglican) Church of Ireland. Graduating from High School she worked in a Dublin stockbroking firm until she came to Australia in 1951 to visit her elder sister. As secretary to the Personnel Manager of TAA she attended a course in which she met an aeronautical engineer, Calvin Rose , whom she married in Melbourne in 1953. Early in 1954 saw them travelling on an extended honeymoon to Kampala, Uganda, where Calvin had been appointed a lecturer in Physics at Makerere University which was linked to London University. Between the birth of three daughters, Mavis fulfilled significant positions with Kampala Municipal Council, and set up the first Girl Guide Troup in Uganda for which country she became the Guide Commissioner.

In 1963 we returned to a CSIRO position in Australia, where in Canberra Mavis gave birth to our fourth daughter, and took up a variety of secretarial positions with the Australian National University between visits to the USA.

In 1973 we moved to Brisbane where Calvin was appointed Dean of Australian Environmental Studies at the new Griffith University. With our children maturing, Mavis was able to take up a long-held ambition to commence University studies. Mavis  completed BA Hons and M Phil in the School of Modern Asian Studies at Griffith University, where she later taught Indonesian Language, an activity aided by significant periods of residence in Indonesia researching for a political biography of Mohammad Hatta, the most courageous and moral political leader of nascent Indonesia who saved Indonesia  from re-colonial Dutch oppression following Japanese occupation. Her biography was published by Cornell University Press, and she translated this into an Indonesian language book following requests from that country.

Mavis had a life-long association with the Anglican Church, but said that her journey with the Movement for the Ordination of Women (or MOW) began at a weekend gathering in Brisbane with the UK leader of MOW which included many women who had experienced a vocation to priestly ministry. With tears in their eyes, they spoke of their deep sorrow when their hopes for ordination had been denied by the structures of the Church. Mavis sensed that she had to do something about raising the consciousness of women about this situation, which she saw as demeaning.

Her very public expression of such a need led to Mavis being appointed as the leader of a new Queensland-based branch of MOW, which challenged male headship with banners and demonstrations outside St John’s Cathedral in Brisbane. Mavis wrote prolifically to the Church Press and local newspapers supporting the case for ordaining women.

Letters and verbal abuse soon followed from all quarters, describing MOW members as “witches on the way to hell”. Such opposition strengthened the determination of Mavis -and MOW members -(I quote from her diary)- “to free the Church of such domination and consequent devaluation of women”.

Mavis’s extensive study involved in writing the definitive biography of Mohammad Hatta taught her (she told me), how to deal effectively with the attempted oppressive domination she commonly received, from the hierarchy downwards, describing her as the “black sheep” of the Anglican Church.

Mavis felt a further need to strengthen her capacity in this demanding leadership task. She approached the Religious Studies  Department of the University of Queensland, who accepted her wish to study the history of the treatment of women in the Anglican Church of Australia as a PhD project. An acceptance requirement was that she undertook all the Department’s undergraduate courses, -which she did, with flying colours- topping the class in Greek and New Testament. The resulting PhD thesis was published with the interesting title: “Freedom from Sanctified Sexism: Women Transforming the Church”.

Much of Mavis’s documentation associated with her MOW activities have been safely located in the Queensland State Library with the assistance of fellow MOW member, Gwenneth Roberts.

Women have indeed transformed the church ministry- but much more rapidly than would have been the case without the tremendous input from Mavis and her local and inter-state MOW companions. Yet this achievement was, for Mavis, a staging post- a start on a process. She saw that whilst the ordination of women was a necessary beginning, a much wider struggle remains to deal with the social and organisational structures of the Church, its ancient language and theological weaknesses, and its commonly limited ability to contribute to the main issues raised by the messages of Jesus such as justice, openness and unrequited love.

It was to begin to address such ongoing challenges to the Church that in 2011 Mavis wrote an as-yet unpublished book entitled “Gender Balanced Belief- A New Ethic for Christianity”. In this most readable book, Mavis has provided a social and theological analysis supporting the thesis that a dominant source of current uncertainty in the dwindling Church membership lies in deep-rooted cultural attitudes which demean or deny the spiritual standing and contribution made by women. Support is brought from modern historical and biblical research showing that much of the bias still existing against the full role of women in ministry has no basis whatever in the words, practice and mission of Jesus of Nazareth, whose message includes justice and respect for all, including women. Rather such bias has cultural origins, both at the time of early development of the Christian faith, and in following millennia.

This book greatly expands her previous analysis of the role of sexism to now cover all churches, including those with centrally patriarchal structures, and those churches outside the mainstream.

The core assumption of the book is that the sexist distortion that has developed in Christianity is redeemable, and that Jesus of Nazareth provides a relevant and vibrant role model for today’s world. The book ends with a realistic review of the historical, social, cultural and power-based hurdles that would continue to inhibit the  gender-just reformation already underway in some sections of the Christian Church. Publication of this book later this year is hoped for, a year after her death.