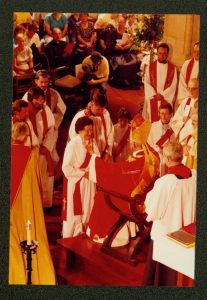 Tonight (6 March 2022) a double celebration is being held in St George’s Cathedral Perth. Tomorrow is the 30th anniversary of the first ordination of women as priests in the Anglican Church in Australia AND International Women’s Day.

This time 30 years ago MOW and its supporters, the Diocese of Perth and many people around the country held their breath hoping that the injunction against Archbishop Carnley ordaining 10 women deacons next day would be dismissed.

Some of us in MOW were lucky enough to get last minute seats on a plane to Perth. Patricia Brennan as usual had no luggage (just a handbag!). As MOW president I left a comment on my answer machine and heard it played on the ABC News and PM in the taxi to the airport. (The late) Pam Albany, convenor of MOW in Perth, was so welcoming and members queued for hours to get seats. What a celebration it was – and what a circuit breaker it proved to be.

The ordination brought an end to a harrowing three months since the Appellate Tribunal’s ‘non-decision’ in December. There were still hurdles: notably the General Synod meetings in July and November, but by the end of 1992 90 women deacons had been ordained priest and two women ordained priest elsewhere (Caroline Pearce and Dawn Kenyon) were finally fully licenced.

Archbishop Carnley contributed a chapter entitled ‘The Perth Ordination: reflecting on law and grace’ in ‘Preachers, Prophets and Heretics’ (New South, 2012) Elaine Lindsay and I put together for the 20th anniversary in 2012. Copies seem to be rare but you may find one by googling it or going to trove.nla.gov.au to find libraries where it is held.

Thirty Years of Women Priests   This year, 2022, is the 30th Anniversary of the ordination ...