I am preparing to preach on my hero, Richard Hooker tomorrow, Wednesday 4/11. There is a very inspiring piece in a book produced for AAPB in 1978 by John Watson. Who is he?, you may ask:
Dr. Watson is an Anglican scholar who has devoted his time in the Christian Ministry to promoting cooperation and respect between distinct Christian denominations. He started this effort in college while he was chairman of the Theological Colleges Union at Cambridge in 1965. In the 1970’s, he worked as press officer for the World Council of Churches, and his academic work described below also reveals his intra-faith work. [RNSAW 1999, 12, art. 27]
Anyway I want to share what he says about Hooker (bewailing my lack of a scanner)
Richard Hooker, English priest, author, apologist of the Church of England – died 1600 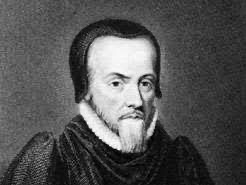 Richard was by general consent one of the greatest theologians in Anglican history: the apologist of Anglicanism as the via media. At Bishopborune, just of the Dover Road, near Canterbury, he wrestled with the question, ‘By what authority?’. It is a central question then, as it is now. Richard stood firmly between the answers being offered by Puritans and Catholics and he thus defined what it is to be Anglican. He did not lightly dismiss the authority of the Church and he stood by the word of the Scriptures, but in his obedience to the Word attested to in Scripture and in his submission to the authority of Christ in the Church he used his reason. Reason is a divine gift to use in interpretation. He weighed everything with exquisite care . “If every man were given leave to follow the dictates of his own heart regarding them as the prompting of the Holy Spirit, the utter confusion of the Church would ensue.” (my emphasis in bold). The  way of the English compromise has proved to be a hard way but there have been great men in the mould of Richard Hooker who have made the Anglican Way a real and lasting thing. The Church is organic, sensitive history and humble before the Scriptures.
While I’m here and on my hobby horse and if you are so inclined you may like to read CS Lewis’ appraisal of him in his Oxford Press tome English Literature in the Sixteenth Century excluding Drama in the chapter “Prose of the ‘Golden’ Period,1944.  pp 449- 463
And
The Spirit of Anglicanism: Hooker, Maurice, Temple  Wolf, William. pp1-48
Author: Lesley McLean