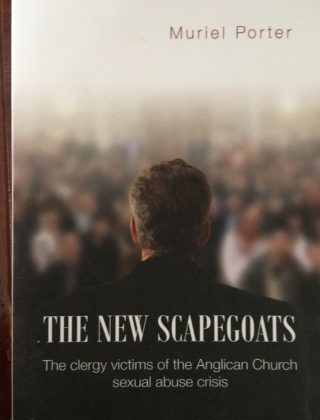 THE CHURCH EXISTS FOR GRACE

Slight though it is in size, this book carries a weighty message. Its background is the crisis of sexual abuse by clergy and other church workers which has been brought to light in the Anglican Church and other churches and institutions in Australia.

Dr Porter’s thesis is that the Church’s concern throughout has been to preserve its good reputation. Initially this took the form of covering up as far as possible instances of abuse. As the extent of the abuse became clear, particularly through the work of the Royal Commission, the same aim of maintaining the Church’s reputation produced a different response. This was to demonstrate the Church’s virtue by imposing unrealistically stringent limits on the behaviour of the clergy and punishing even minor offences with undue harshness.

The author in no way exonerates those clergy or other church officers who have abused children. When such abuse is proven they should be subject to the full weight of the law both of Church and State. But the book condemns “the harsh treatment exacted by the Anglican Church against clergy (and church officers) for not conforming – or being accused of not conforming – to the rigid new sexual purity standards imposed on them”.

The argument is that when the reformers of the 16th century changed the rules to allow the clergy to marry the Church was in effect rejecting the proposition that the clergy needed to be purer in their lives than the laity. In the present day the accepted standards of sexual behaviour have changed. For example, many couples coming to be married in church have already been living together, and the church accepts this and welcomes them. Gay people, too, who are openly living together are not excluded from our congregations. Yet a quite different standard is expected of the clergy.

This stricter standard was laid down in the code of conduct for clergy and other church workers, Faithfulness in Service, adopted by the General Synod in 2004. This laid down the principle of “chastity in singleness and faithfulness in marriage” as the basis of their behaviour. Sexual activity with a person with whom the clergy have a pastoral relationship was excluded, and consent by the other party to such activity “will not be regarded by the Church as valid”. These standards have often been implemented harshly.

Not everyone will agree with Dr Porter on what is to be regarded as the appropriate standard of sexual behaviour of the clergy. Is she right in thinking that the Reformers would accept current attitudes to morality as setting the standard? In light of biblical injunctions (e.g. in 1 Timothy 3) about the standards expected of bishops and deacons would they not have required a higher standard of behaviour for those in leadership positions in the Church? And even though there are clearly debates in the Church about moral standards, can we expect those setting out a code of behaviour for the clergy to adopt any other basis than “the existing standard of chastity and the traditional disciplines of the Church”?

Whether or not we agree with the author on these things, there is still plenty of evidence in this book to cause disquiet. One matter raised is the increased tendency to impose the ultimate penalty of deposition from holy orders, which had hardly ever been used until recently, as a relatively common form of punishment. The most glaring case of this was the deposition of the former Bishop of Grafton, Keith Slater. He had clearly failed to deal adequately with instances of child sexual abuse which had come to light in a children’s home in his diocese. Others in the diocese shared in that failure, and there were elements in the situation that helped explain (but not excuse) it. He accepted his failure and resigned from office. But subsequently he was deposed from holy orders, presumably to show the world how tough the Church could be by punishing even one of its own bishops with the ultimate penalty. So he received the same punishment as even the most degraded perpetrators of sexual abuse.

Other instances are given of clergy who had been guilty in the past of sexual misdemeanours of various degrees of seriousness to which they had owned up but for which they had been deprived of their ministry. For example, there was the priest who as a teenager had a sexual relationship with a sixteen year old girl which was reported to the police. Later as an ordination candidate he informed his bishop, who did not see it as a barrier to ordination and ordained him. The need to obtain a police clearance later brought the incident to light and the man was immediately removed from the ministry. Other similar cases are quoted.

There are two problems about this regime of punishments. One is that it removes the distinction between different degrees of seriousness of sexual sin. One-off failures, or failures in the distant past – which may have been repented of long ago and not repeated – are treated in the same way as much more serious matters. The other problem is that sexual sins are treated in a way quite differently from other kinds of sin, whereas from a Christian perspective there are many other kinds of sin that are equally, or much more, serious.

We are all sinners, and all fall short in some measure from Christian perfection. But forgiveness is central to the message of the Christian Gospel. The risk for the Church at the present time is that in our natural desire to show how we have repented of earlier failures in our handling of sexual abuse we fall into the error of dealing harshly with clergy whose real or imagined sexual misdemeanours fall far short of the abusive or exploitative behaviour that has rightly been the cause of past scandal.

The Church is in danger of slipping back into being a religion of law, not of grace. If there was sin we need to ask questions. How serious was it? Was anyone harmed? Is there continuing likelihood of repetition? Has there been true repentance? There needs to be a sense of proportion. Serious cases of abuse and exploitation are rightly dealt with severely, and may require permanent deprivation of ministry, even where forgiveness is appropriate. Lesser failures should be accorded the possibility of forgiveness and restoration.

Clearly some clergy have suffered unduly under the present regime of discipline, and others are feeling under threat from it. That is serious for those who are harshly penalised and for the morale of the clergy in general. Even more serious is its distortion of the central Gospel message of forgiveness. If the Church loses this, it loses its reason for existence.

This is a book that the Church needs to take seriously. In particular all bishops and professional standards committees should read and ponder it deeply.

In response to its public shaming over child sexual abuse allegations, the Anglican Church of Australia has adopted draconian measures to regulate its clergy as a means of rebuilding its shattered reputation by appearing tough on every aspect of their lives. Its insistence on harsh puritanical standards of sexual behaviour has exposed Anglican clergy, innocent of any abusive behaviour, to demeaning punishments that in some cases have resulted in their deposition from Holy Orders. The New Scapegoats explores this hidden outcome through case studies, a comparison with the situation in the Church of England, and an examination of several theological aspects: the impact the new rules are having on the concept of the priesthood of all believers; sexual purity; forgiveness; and scapegoating.

Dr Muriel Porter OAM, a Melbourne journalist, author and historian, is an Anglican laywoman. A member of the Anglican Church of Australia’s General Synod for the past thirty years, she has written extensively about issues facing the contemporary church. She has held a position as Honorary Research Fellow of the University of Divinity since 2016.