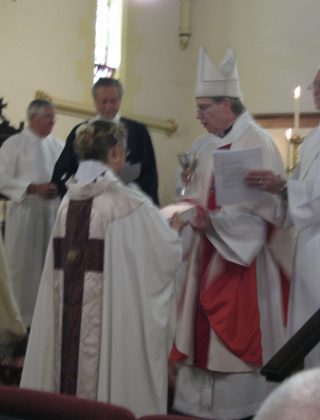 whose Word insists even while it whispers,

whose Touch is adamant, however gentle it may be,

requiring of us that we respond in faith:

in drawing nearer to your Church’s heart,

may we draw even closer to your world,

in our families and among our friends,

in our communities and the places of our work;

encourage us to follow the example of the One

who took the Towel and gave us of the Body,

who went the Way of the Cross and gave us of the Blood,

without whose friendship we shall misuse the power you place,

as with the shepherd’s Staff, into our hands;

turn us inside out and others’ expectations upside down;

as fools for the sake of Christ

may we surprise ourselves in laughter and in joy

embracing the unacceptable and disturbing the respectable;

put us to the test, that our vocation, as silver, may be tried,

and fit us for the ministry of leadership

with and among your people in churches large and small;

show us how to discern your will, especially if it be a No;

free us from the illusions that come with power and standing;

in these days of our preparing,

give us clues to the pattern of our future:

by means of unsung deeds that others will appraise,

and through which, if wise, we shall have the grace to learn;

empower us to enable the flourishing of your people

in worship and in witness, in contemplation and in action;

humble us to represent your Church

among the people and institutions with whom we have to do;

of the Way and Spirit of the Beckoning Christ

in whose Presence we now in silence ponder . . .

make me truly human in my singularity,

form us into true communities in our diversity,

and so give us glimpses of a world of glory,

restored, made whole, and gathered into one.

A prayer printed on a foolscap card given to Lesley McLean on the occasion of her ordination to the priesthood 11 December 1994 by Helene Mann, priest in the diocese of Dunedin, New Zealand. To dear Lesley, ‘May every grace of ministry rest on you’ (from the N.Z. Prayerbook, Ordination of Priests) with much love and prayers.

‘JIM COTTER was a wordsmith whose prayers, psalms, and hymns helped men and women forge a modern spirituality. Some songs were new, and others were reworked old favourites sung to well-known tunes.

Writing and speaking for nearly 50 years, he shared his spiritual and religious experiences with a large network of people built up through his work with Cairns, his publishing organisation begun in the 1980s. This was a personal as well as a public process, as he described the challenges of being gay and recently his battle with leukaemia. His prayers in books such as Prayer in the Day (illustrated by Peter Pelz), Prayer at Night, and Pilgrim Prayer are modern classics. Nearly 30 other books and pamphlets followed, and he became an editor, com-piler, and publisher for more than 15 other writers.’

The Revd Malcolm Johnson: obituary in the Church Times 25 April 2014.

A recommendation for Out of the Silence… Into the Silence by the Rev’d Lesley McLean.

I began using his Out of the Silence… Into the Silence, 1996, for my daily office and have become aware of a change in me. This seems to not just apply to me as mentioned in the Foreword page xvii by Brian Thorne, Fellow of the British Association for Counselling and Psychotherapy; Honorary Lay Canon of Norwich Cathedral.

I believe there is a real need for prayer forms which reflect generosity, inclusivity and a deep spirituality. As Esther De Waal says,  ‘It can [also] be a place we can turn to for helpful some immediate situation or need: genocide or gossip, terror or rejection.’ p. xv.

Jim himself had the vision of ‘on-line’ prayers which have become so acceptable and have been so welcome during the pandemic. On page xiii, Jim writes ‘because [this] is a long book and verges on being a directory, resources or quarry, it will also be available … on the Cairns website.’ I have written to Canterbury Press with suggestions it be made available online. Prayer needed please. Lesley