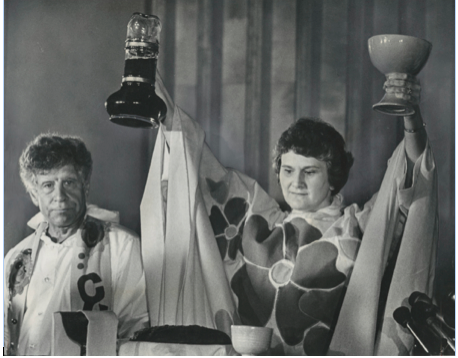 The Reverend Alison Cheek was a significant figure in the early days of the Movement for the Ordination of Women in Australia. She made a number of visits in the 1980s and early 1990s, particularly at crucial times such as General Synod meetings. She was a tower of strength to MOW as a community and to individuals within it. A pioneering women of stature and faith, she manifested the reality of women priests in the Anglican communion to us and to Anglican Church authorities in Australia. Janet Scarfe

The Rev. Alison Cheek celebrates the Eucharist with the Rev. William A. Wendt, rector of St. Stephen and the Incarnation, in November 1974 in Washington, D.C. Photo: Harry Naltchayan/The Washington Post via Getty Images

[Episcopal News Service] The Rev. Alison Cheek, one of the first female priests in The Episcopal Church and the first to publicly celebrate the Eucharist, died on Sept. 1 at her home in Brevard, North Carolina, according to friends. She was 92.