The Archbishop, the Most Reverend Roger Herft AM, presided and the Reverend Joyce Polson preached at the recent service, which was attended by the wider community, as well as staff and students past and present from St Mary’s Anglican Girls’ School, where Reverend Joyce served as Chaplain from 1986 to 1994.

Reverend Joyce was admitted to the Order of Deaconesses in 1955, the only ministry open to women at that time. She was made deacon in 1986 and ordained priest in 1992, with the first group of women to be ordained as priests in Australia.  She has made significant contributions to ministry in the Diocese of Perth, including the Parish of Applecross, Diocesan Board of Religious Education, St George’s Cathedral, and the Parish of Yanchep as well as St Mary’s.

In 1999, Reverend Joyce was awarded a Medal of the Order of Australia, for service to the community through the Anglican Church.  She also received the Enduring Service Award from the Australian Association of Religious Educators (AARE) in 2013, for her length of service in ministry in the Anglican Church.

Since 2010, Reverend Joyce has been helping the current Chaplain of St Mary’s Anglican Girls’ School, the Reverend Geraldine Nixon.

“There is never a dull moment when Joyce is at school as she has a wicked sense of humour!  I now consider her my confidant and close friend,” says the Reverend Geraldine Nixon

In 2010, the St Mary’s Old Girls’ Association made Joyce an honorary member of The Association and she has served on their committee since 2011.

Jane Gillon, an Old Girl from the Class of 1970 and past president of The Old Girls’ Association, said, “Reverend Joyce is a treasured friend, chaplain, and confidante who holds a special place in my life and in the lives of so many Old Girls of St Mary’s.” 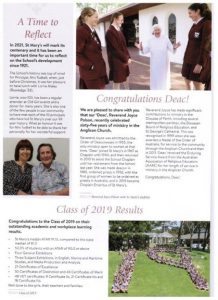